To see how this works, let’s imagine that the values of a given binary outcome

is driven by the following data generating process:

refers to an unobserved latent variable ranging from

which depicts the underlying propensity for a given event

represents the effect associated with the

to be adjusted up or down.

is above a given threshold

. By convention, we typically assume that

. If we further assume that

has a logistic distribution such that

, we find with a little bit of work that

This should look familiar—it is the standard logistic regression model. If we had assumed

took on a normal distribution such that

, we would have ended up with a probit model. Consequently, anything I say here about the logistic regression applies to probit models as well.

The relationship between the set of “true” effects

and the set of estimated effects

Simply put, when we estimate an effect using logistic regression, we are actually estimating the ratio between the true effect and the degree of unobserved heterogeneity. We can think about this as a form of implicit standardization. The problem is that to the extent that the magnitude of

varies across models, so does the metric according to which coefficients are standardized. What this means is that the magnitude of

The implication here is that we can’t get away with the usual trick of comparing a series of nested models to determine the way in which the inclusion of controls affects the parameter estimates associated with a given variable of interest. Moreover, we can’t compare group-specific models unless we are willing to assume groupwise homoscedasticity. The latter principle also extends to the interpretation of interaction effects within a single model. In other words, unobserved heterogeneity can pose big problems in the context of logistic regression.

Perhaps somewhat surprisingly, discussion of this issue goes back at least as far as Winship and Mare (1984) who proposed a solution based on the use of a standardized dependent variable. Alternative solutions have since been proposed by Allison (1999), Williams (2009), and, most recently, Karlson et al. who have a paper forthcoming in Sociological Methodology. In addition to providing a nice overview of this line of work, Mood (2010) discusses a number of other solutions including the use of linear probability models. While the linear probability model is not without its problems, it is easy to estimate and interpret. Moreover, the problems that does have are often easily remedied without turning to logistic regression.

This got posted at R-bloggers last night, after the men’s 100 meter Olympic event was over. Marcus Gesmann predicted Usain Bolt’s 9.63 second result within 0.05 seconds. Even better, he did it using a simple log-linear model that didn’t control for any other factors.

Check the original article at R-bloggers, which talks more about the progression of faster running times and includes the R code used. 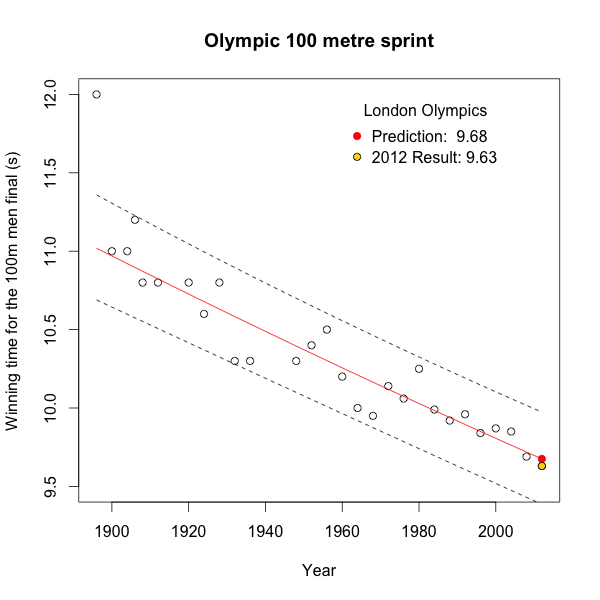 No university computers were used, let alone harmed, in the making of this site.